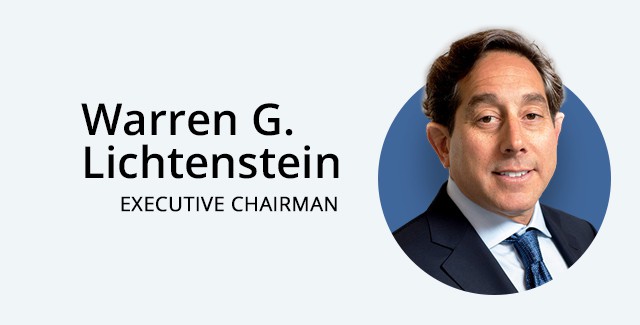 Mr. Lichtenstein has served as the Chairman of the Board and as a Director of the Company since March 12, 2013, and as its Executive Chairman since June 17, 2016.

Mr. Lichtenstein has served as director of GenCorp Inc., now known as Aerojet Rocketdyne Holdings Inc., since March 2008 and Executive Chairman since 2016.

He also served as Chairman of the board of Handy & Harman Ltd. from July 2005 to October 2017 when it was acquired by Steel Partners Holdings L.P. He served on the board of SL Industries, Inc., where he also was CEO from February 2002 to August 2005, which, in 2016 was acquired by Handy & Harman. From 2010 to February 2017, Mr. Lichtenstein served as a Director of Steel Excel, Inc., which was then acquired by Steel Partners Holdings L.P.

Mr. Lichtenstein is a Director for the Steel Partners Foundation, Steel Sports Foundation, and Federal Law Enforcement Foundation. He is also on the Board of Advisors for the University of Pennsylvania School of Arts and Sciences.

Mr. Lichtenstein holds a Bachelor of Arts in Economics from the University of Pennsylvania.